Party of the Year?

I love some surprises. This was one of them.

Months ago I booked a Friday afternoon family reunion for Labor Day weekend. Orthodox families will book me for the hours leading up to the Sabbath. Saturdays are off limits for them, and Sundays are often travel days – though sometimes we squeeze sessions right before luggage returns to cars.

“Yup,” I replied, adding, “looking forward to it. See you in two weeks.”

“We made a mistake on the calendar, are you available this Friday?” the client replied.

We’d communicated via email, text and on the phone – though we’d yet to meet in person. I wasn’t sure what to think, but as it turned out, I was available.

“Sure, see you this Friday,” I replied, attaching a revised contract, showing the new date.

Thursday morning brought another email (sent late the night before)

“Any chance you could come Thursday?”

As it turns out I could, “Sure, see you later,” I replied. 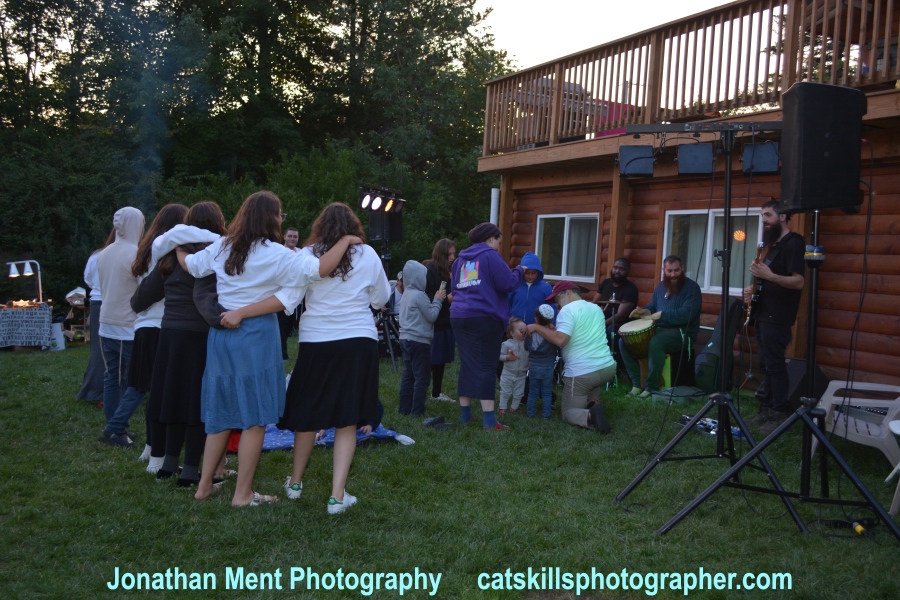 Things get a little hectic on Fridays, for orthodox Jews. I’ve photographed a handful of reunions like these in recent years. Thursday was actually a great option. Instead of simple sets ups and candid coverage, it was also a party – with a catered barbecue I was repeatedly beseeched to partake of.

There was live music that began with a jam session, on bongo, Cajun and guitar. It evolved into a full-blown open-air rock concert with keyboard and drums.

My Hebrew is almost non-existent so I asked what some of the songs were about, those that weren’t classic rock sung in English of course. The band was great. What more can I say?

After photographing a reunion at the Raleigh Hotel earlier this summer, I wrote about the celebratory approach to something as simple as a large group portrait.

Sure, you still get the occasional ‘cheese,’ but creating smiles through laughter, love and song is the norm.

I’d actually had another potential booking for that Friday of Labor Day weekend, a rehearsal dinner – not the wedding that would follow. But the bride went with a friend of the family not a pro.

Plus, I still had the session I’d booked just on a different date, and it was possibly the best party of the year.

This might be the one I’ll be measuring others against for the remainder of the season.

Thanks for taking a look. You can also find, follow & like Jonathan Ment Photography on Facebook & at www.catskillsphotographer.com and check out the broad-topic’d “Observational Ramblings” of the Ment Media Group’s “Business Blog.”

2 thoughts on “Party of the Year?”