This weekend I pointed a lens at the 7th Annual Snow Festival at the New York Power Authority’s Blenheim-Gilboa Visitor Center hosted in partnership with Mine Kill State Park. I may be a little older than the target market, but I’d hoped to find a few things of fancy to photograph. It was 47 degrees… Here’s my event diary. 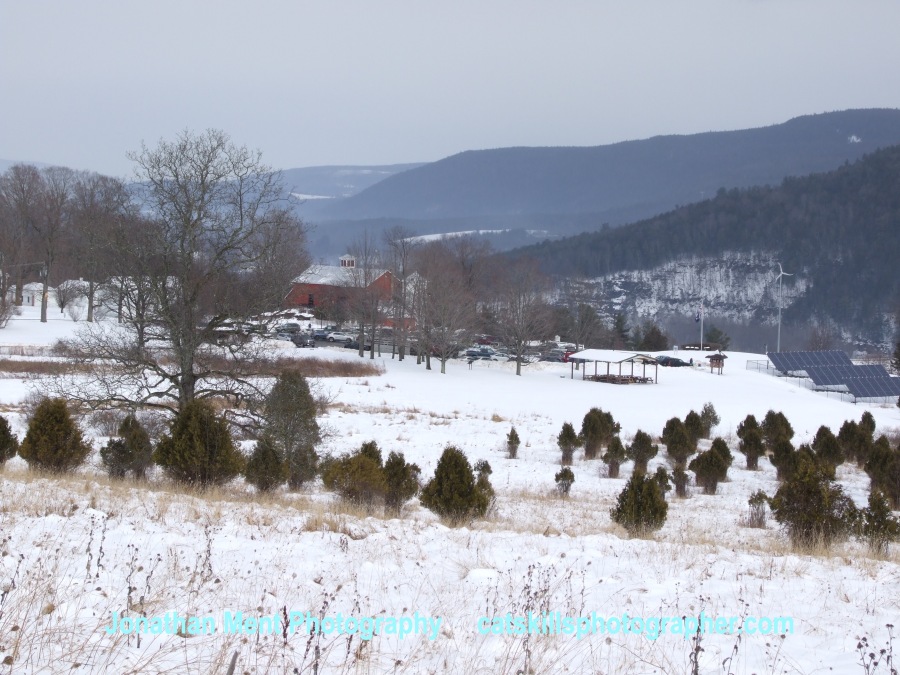 I did manage to climb on board the wagon for a ride powered by Heather Brooke Hill Clydesdales- beautiful animals. Though the driver wasn’t volunteering anything, he was quite personable and answered all of my questions about the rigging and the animals. I asked about the shiny silver balls atop what I learned are the “hames,” the part of a harness that is used to distribute the load around a horses neck and shoulders when pulling a plough, which I thought looked like gear shifters. He said they’re always like that, to avoid being pointy sharp things, and described some antique hames he either had or had seen. This fellow was a good sport.

“Are they related?” I asked, of the horses pulling us around the grounds.

Didn’t find the snow bowling, though I’d hoped to try it.

Spotted signs of as many as two scavenger hunts – even worked most of the way down the list of things to find outdoors including a snow drift (heck, this event was so well attended I had to park in one), animal tracks, boot tracks and birdhouses. I made a case that boot tracks were also animal tracks of the two-legged variety, and since the target audience was probably four to seven-year-olds they were quite lenient.

An employee from a NYSDEC run park said she didn’t even know if there was a river or stream on the property, though it was on their list of things to hunt for.

I told her we were at a hydroelectric plant and there was probably some water around somewhere. (It’s the Schoharie Creek, I believe).

Was curious about the sled dog demos, but it looked like perhaps conditions were too slushy for effective mushing.

Inside, I poked my head in the chili cook off area, but shied away when I saw it was necessary to sign a waiver before sampling. Actually, I’m just not that in to chili.

There were also retail vendors and representatives from a number of area sites and attractions including state parks; and others with other nature-themed agendas – such as hiking (shout out to the Long Path North Hiking club) and invasive species. (Here’s a bit on that, from some marketing content I created in 2017)

I’m told I missed most of the raptors, though Outpost #4 Wildlife Rehabilitation was on hand with a magnificent owl or two. Also missed Mickle Hollow Maple’s intro to Beekeeping. What’s the buzz? I ask you.

I was particularly taken by the mother and daughter dogs on hand to represent the SUNY Cobleskill Canine Club, and snacking on bits of hotdog. Naturally, I didn’t take a picture…

I did get the chance to chat with a fellow about Landis Arboretum, a public garden which includes an old growth forest among its natural habitat and imported species plantings. The site also has an event space and hosts the occasional wedding, though I was discouraged from visiting when the unplowed driveway to the venue is covered with snow. I’ve photographed weddings all around Esperance, NY including Altamont and Cobleskill, Rotterdam, Schenectady, Central Bridge, and more, but never right there. I look forward to taking a look after the thaw.

All-in-all, Snow Fest was a welcome distraction. Most or all of the events hosted at Blenheim-Gilboa Visitors Center, and the energy-themed center itself which is open daily from 10 to 5, are free to visit.

As many of the regularly installed exhibits were blocked off or inaccessible on this trip, I’ll surely return to take a look when there’s a bit less going on – even if there was little to tickle my photographer’s inspiration bone on this trip.