There are more ‘cameras’ out there than ever before, but not every smart-phone slinging shutterbug knows a lot about shot composition.

That’s alright. It’s why there are photographers.

We’re supposed to understand a bit about what make an image more than good and where the possibility exists to move the observer, to make them ‘feel’ something other than mere recognition.

It’s the difference between ‘that’s a nice picture of those two’ and ‘wow, those two must be in love.’

Recently I updated my mug (face) across most social media. I won’t go into why (some do as often as the weather), but I will explain how.

I took the image I’d been using, which I was happy with, and flipped it horizontally in Photoshop. That’s it. I cropped it basically the same way and uploaded.

What struck me, after Facebook friends were notified of this breaking news, was the feedback I received on my new profile pic – specifically the lack of a particular type of comment. On a related note, I do ‘maintain’ a Facebook page for my photography, though – the profile pic isn’t there… Go ahead and follow or like me on Facebook. I don’t bite.

Perhaps folks were just being kind, and who doesn’t appreciate a little flattery, but nobody wrote “That photo looks familiar,” or “Is that the same photo just backwards?”

I know, I know… when you update your profile pic, folks don’t get to see it side by side with the old one like here.

Still, I wasn’t expecting any feedback – and once it began, I thought someone would mention it.

If you’ve been using a shot for six months or more and you’re active online, I’d assume people would recognize your profile pic.

O.K. Let’s put that all aside. Perhaps nobody looked at my pic since May, and were sincerely complimenting me on the new image.

The response however, dozens of likes and the related comments, got me thinking my reasons for flipping the photo were valid.

It got me thinking about mirrored images and inverted images, though turning folks into their negative sometimes produces scary results. Nonetheless, Mirror:Mirror is this week’s theme.

(Tangent Warning/TW) coincidently the approximate name of a favorite episode of Star Trek TOS about an alternative universe. No, we’re not writing about Star Trek – though I can’t help sharing this shot of alternate-universe Spock -straight and half inverted. 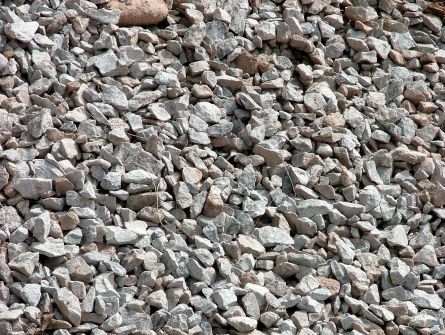 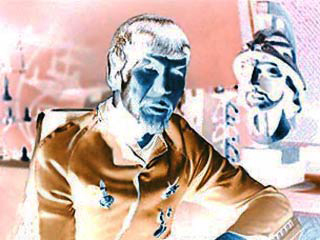 What the hell, for those of you unfamiliar with the show (you’re probably out there) – here’s what Leonard Nimoy’s character usually looked like, next to ‘evil Spock.’

If you’ve got to have more on the Star Trek thing, you can read this piece by R.S. Guthrie who sums it up nicely

Back to this reality.

Perhaps because of my film and video training has conditioned me to notice continuity errors such as unbuttoned shirts between takes, or line-of-sight conflicts, I often notice – or think I notice flipped photos. Sometimes the give away is in the background. Sometimes it’s as simple as a T-shirt with backwards content.

A photo might be flipped so that it will read better on the page (or screen).

A sequence might be ‘flipped’ day for night, as in the filming of Alfred Hitchcock’s “Pscycho.”

Or, an image might be flipped artistically, purely for arts sake – possibly even paired with the original in kaleidoscope fashion. 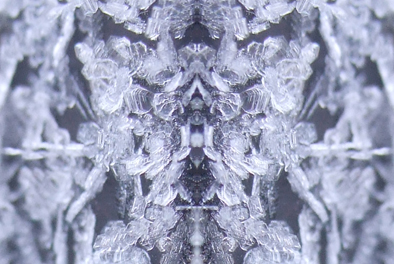 Here are two shots that probably shouldn’t be flipped – even if advantageous for the layout.

Here’s a shot that’s flipped to no end. It’s a throw-away snap of a bird and nothing is really gained in this instance by flipping it on it’s own – but when paired with the original it starts to become something. 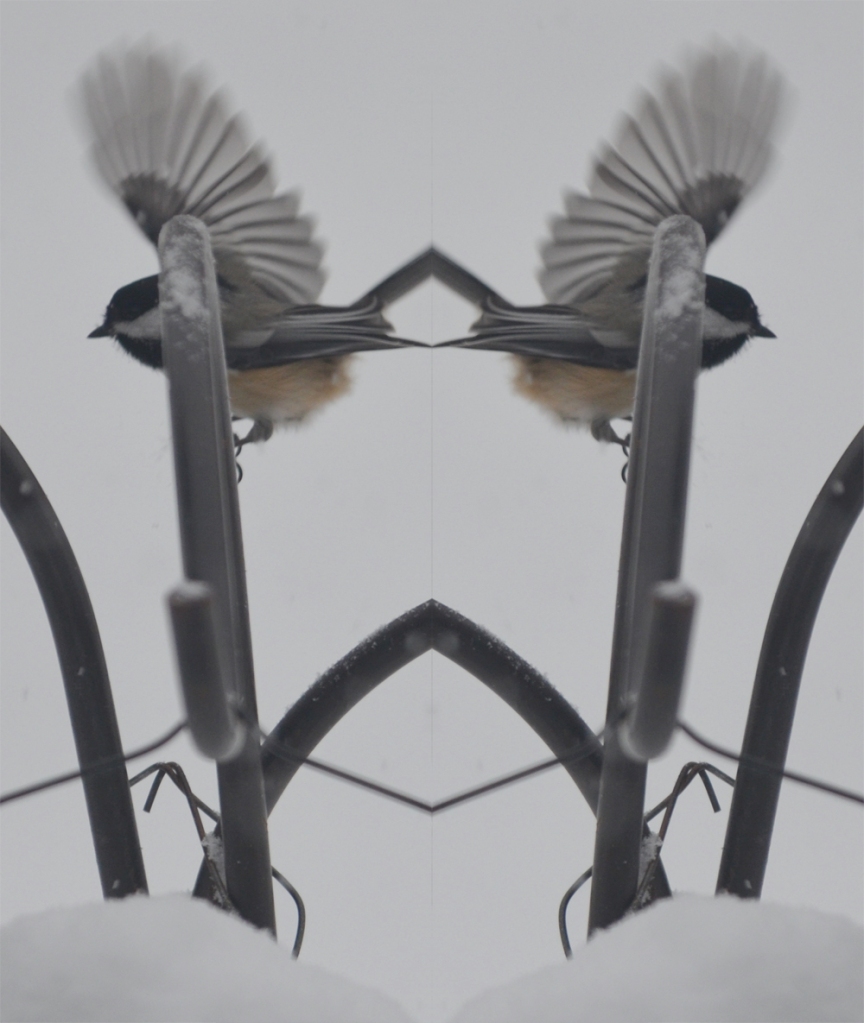 In this split-screen sundial from Five Rivers which I wrote about a few weeks back, the left side retains the natural patina. The right half, which is inverted, looks more like vintage brass. I think it looks better than the original in some ways, because the dreadful mortor applied to deter thieves is less obtrusive. I’m amused at how completely natural the boulder looks on both sides. It seems like there might be a use for this anti-aging effect on old metal in photographs.

My wife, the whitewater guide, first asked if this was a real reflection shot then, after I showed her how it was achieved said “that can’t be real, because the water would be rippled from the waterfall.” Water-smart, she is. She also corrected me on location. It was North Carolina, not Maryland. I knew there was a wedding involved. 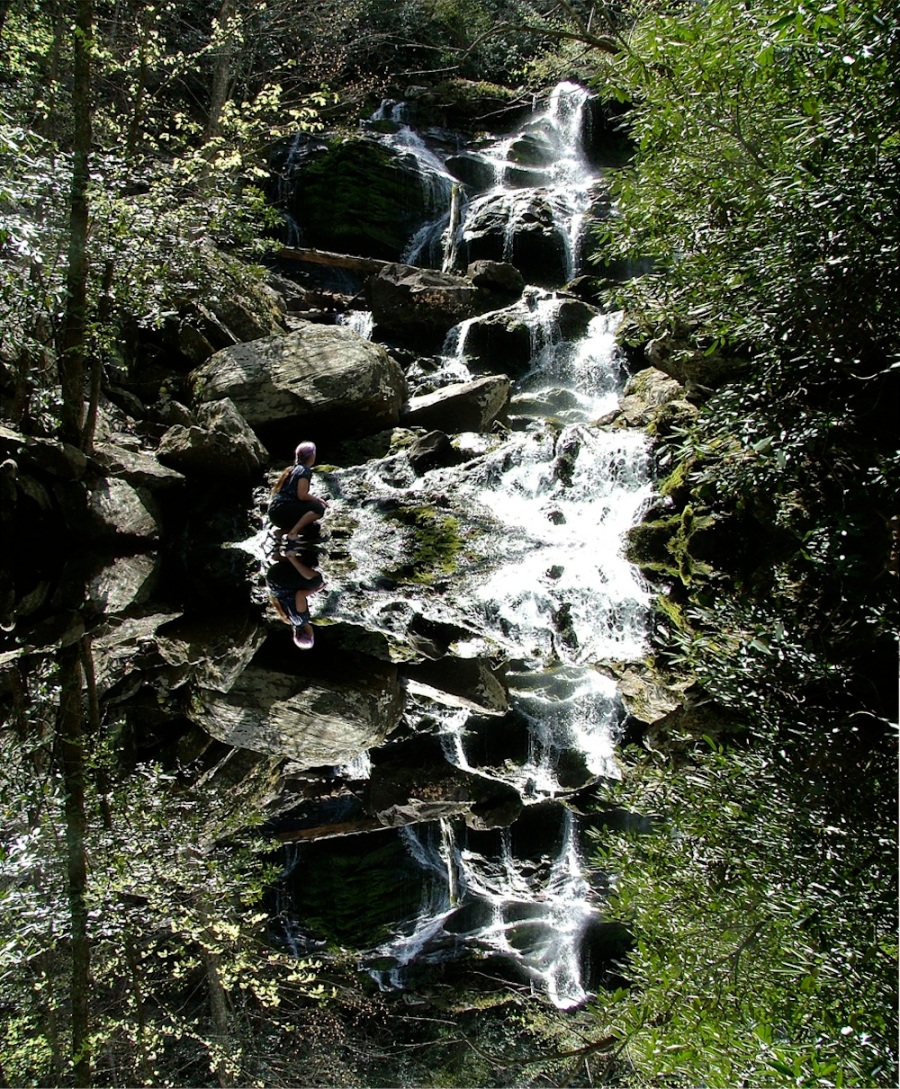 It could be interesting to look at and share your ‘mirrored’ images in a future post, and I’d like to pursue it as a way to extend the conversation

I’m going to borrow some guidelines from Leanne Cole, who absolutely sets the bar for this sort of community activity. Full disclosure: While writing this I discovered Cole recently published “Reflections” for her Monochrome Madness blog.

(Madness indeed! Have I any original thoughts?)

I’m blushing at the similarities, but stress I’m interested in manipulated images not naturally occurring reflections.

As such, I invite you to email your manipulated photo(s) to jonathan@mentgroup.com when I have enough to proceed, I’ll revisit Mirror:Mirror and share. I’d like to revisit in a week or two. Let’s see if interest grows.

For the sake of my Internet connection and the needs of the web, images should be resized to low-resolution with the largest size 1,000 pixels or less and saved with a new file name (protect your originals!).

If you have something great to share, but prefer to remain anonymous in the blogged version, that’s fine too. Just let me know.

Any questions? Drop me a line.