Five Rivers is a parcel of 450 acres managed by the NYS Department of Environmental Conservation.

After years of driving past the place, always a little curious (not too curious) some months ago my wife and I finally took the side road that leads there and spent a while getting acquainted with the center

Last week, though the temperature hovered near 30, I returned with a camera in search of inspiration.

If you believe, as I do, that the ‘devil is in the details,’ than no matter how cold and grey, snow and ice covered, or bleak a natural setting may appear, there’s always something there – the closer you look.

On this walk, with a dreary light reflected off so much whiteness I was forced to stare down at to maintain my footing, my eyes grew tired quickly (sacrifice for my art!) and I found myself looking for patches of darkness to relieve them. I found those in the trees, and brush

Note: If you find yourself here on an icy afternoon – the facility has crampons

to offer some surefootedness, but did I take them up on it? Perish …!

As I walked around the lake (manmade, I believe) things began to present themselves to me.

Almost immediately, there’s a bench sheltered from the storm. I immediately named the photo “Rest” although no rest would be required on this short outing – and it was certainly too soon upon just setting out. 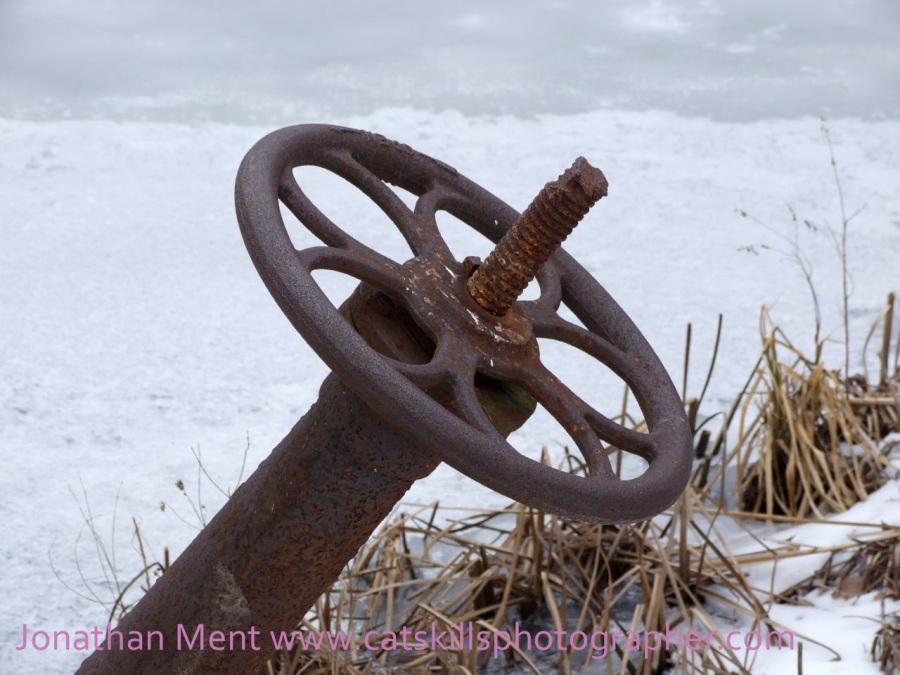 Shortly I arrived at this rusted relic, which I felt had a floral quality in its handle design. It was also growing like sort a flower out of the bank of the lake. I imagine it was part of some old waterworks there though its haphazard state of de-installation suggests it’s no longer in use.

I was struck by the bark on several trees at Five Rivers, perhaps because it was the closest thing to color I came up this chilly afternoon.

Perhaps because as I’ve mentioned in an earlier post (LINK) I’m always looking for texture.

I also spotted a stump, which was weathering nicely. 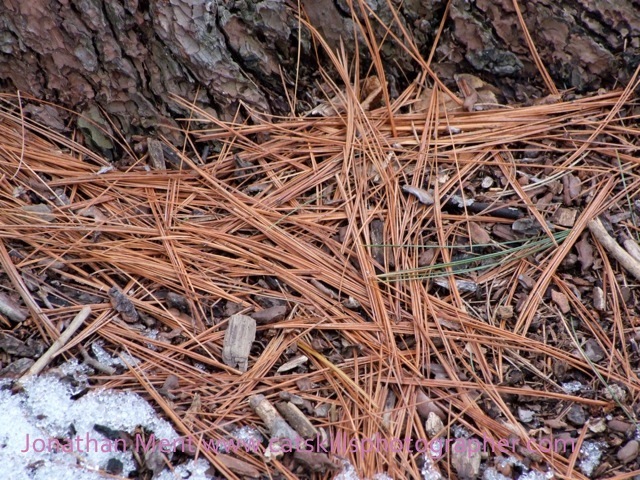 These needles also did it for me. Can’t tell you why.

Approaching this particularly treacherous walkway (Just as bridges and overpasses freeze first and harder than the surrounding road surfaces, elevated wooden decks are potentially more hazardous than the dirt and gravel paths they connect) I was struck with a surfeit of paths..

Just as I would walk over the elevated path, aquatic life might travel the waterway below, as small mammals might opt for the log crossing. Just a thought.
And while my icy path provided the opportunity for a hardier freeze, it also permitted me to travel through the undisturbed rustling of the dried winter grasses and weeds. It was here that I took my favorite photo of the trip

Here’s where my walk got really interesting.

Focused on the minutia, I wasn’t paying much attention to my broader surroundings. And … wait for it, walking around a small man-made lake possibly with several foot bridges intersecting it, I found myself slightly turned around (if it was darker, and I was a drinking man, I’d say o.k. I was ‘lost’)

Just in the nick, I spotted this.

and Although the direction it was pointing in was vague, I took an overgrown path up and eventually found my way back to my car stopping only to study this sundial and wonder, as I often do when faced with acts of unnecessary cruelty and random bits of vandalism …

2 thoughts on “Capturing my Imagination”